The young man was found by divers, shortly after the discovery of the Alisha Ann Heinrich, previously known as Mississippi Delta Dawn 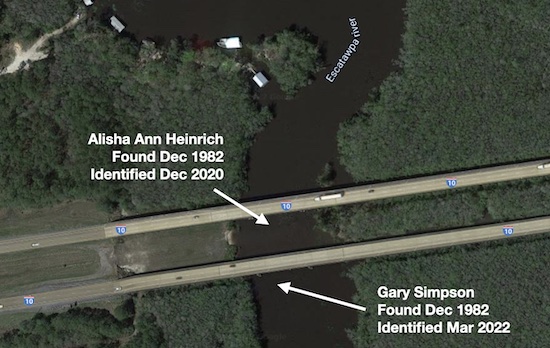 On December 8, 1982, human remains belonging to a young African American man, were found in the Escatawpa River underneath the eastbound lane of Interstate 10 in Jackson County. The remains were located by divers, who were searching the river after a female toddler was found deceased in the area, days earlier. The female toddler, formerly known as Mississippi Delta Dawn, was identified as Alisha Ann Heinrich in December 2020 by Jackson County investigators and scientists at Othram. Although the remains for both victims were found at the same time, investigators later determined that the deaths were not related.

The young man’s remains were collected by the State Crime Lab, where his death was ruled a homicide. His identity remained a mystery for 40 years, until Jackson County investigators, once again teaming with Othram, used Forensic-Grade Genome Sequencing® and genealogical research to identify a close relative of the young man. Due to the degraded quality of the DNA, multiple attempts were necessary to establish a useable profile for genealogical search. Retired investigator Matthew Hoggatt, who assists the Jackson County Sheriff’s Department and Othram with cold case investigations, contacted a family relative and arranged the collection of buccal swabs for DNA comparison. Swabs were sent to Othram. After testing the relative’s DNA, Othram confirmed that the relative was a biological sibling of the young man. The unidentified person has now been identified as Gary Simpson, born in 1962, originally from the Louisiana Area.


This case was generously funded by philanthropist and genealogist Carla Davis, who also assisted with the genealogical research for the case.

Jackson County investigators continue to investigate the circumstances leading up to Simpson’s homicide, as well as how he ended up in Mississippi. If you have any information regarding this case, you can contact the Jackson County Sheriff’s Office at 228-769-3063 or Mississippi Coast Crime Stoppers at 1-877-787-5898 or visit MsCoastCrimeStoppers.com