In May 1974, Connecticut State Police recovered the decomposed remains of an unidentified woman from a wooded area in the town of Ledyard, Connecticut. The agency had received a tip about two murders that had occurred at a home on Shewville Road. Investigators located two shallow graves several hundred feet behind the house, in which they discovered the decomposed bodies of a man and a woman. Investigators later successfully identified the man as Gustavous Lee Carmichael, a convicted serial bank robber, who had previously escaped from federal custody. He and the woman had been known to use the aliases Dirk Stahl and Lorraine Stahl before their murders on December 31, 1970. In the subsequent years, two men, Richard DeFreitas and Donald Brant, have been convicted for the murders of the individuals.

The unidentified victim, a White woman, was estimated to be between 18 and 30 years old at the time of her death. Investigators also estimated that the woman stood 5’2” in height. However, due to the decomposition that had occurred, investigators were unable to make determinations about the woman’s eye color or hair color. Investigators believe that the woman had died in 1970 and was the victim of a homicide. 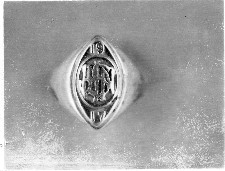 Several items of clothing and jewelry were recovered with the body, inlcuding tan leather “wet look” vest, a gold or tan sweater, a brown tweed skirt, and a pair of brown Grannie boots. The unidentified woman was also wearing two rings and a wood-carved broach or pendant. The wood-carved figure appeared to be an abstract ceremonial head. One ring appeared to be a school ring with the letters J.H.S.N. monogrammed, and the initials I.L.N. and the date 1917 engraved inside. The other ring is an inexpensive one with an animation emerald stone.

It was also established that the decedent had been known to drive around the area in a vehicle that had been found dumped in Hartford, Connecticut with a Maine inspection sticker - a green 1964 Oldsmobile with either Massachusetts or Maine license plates. Additionally, investigators were able to recover a yellow raincoat that the woman was known to have worn, as well as a Lady Clairol brand hair roller set which was known to belong to the woman.

Since the discovery of the unknown woman’s remains, law enforcement investigators have diligently pursued various leads about her identity. Investigators located a woman named Lorraine Stahl, who had moved from the area in the months prior, and determined that her identity had been assumed by the unidentified decedent. Investigators also created a composite sketch of the woman's appearance as she had been known in her life. Years later, in July 2011, the case was entered into the National Missing and Unidentified Persons System (NamUs) as case number #UP8909. Despite the exhaustive efforts of law enforcement, the woman’s identity has remained a mystery. With few leads for investigators to pursue, the case went cold.

In 2022, the Connecticut Office of Chief Medical Examiner partnered with Othram to determine if advanced forensic DNA testing could help establish an identity for the woman or a close relative. A DNASolves crowdfund has been created to raise funds for the remaining casework costs. Anyone can contribute here. Anyone with information that could aid in this investigation is encouraged to contact the Connecticut Office of Chief Medical Examiner by calling 860-679-3980 and referencing agency case NL-74-238 or NamUs ID #UP8909.