In October 1994, human remains belonging to an unknown woman were found in a wooden area under a bridge in Hancock County Indiana. Investigators thought that the remains were likely there for several months before discovery. The woman had appeared to be a white female with short brown hair, stood approximately 5’1” to 5'4” in height, and was between 30-50 years old at the time of death. Hancock County detectives subsequently opened an investigation into the unknown woman’s death. 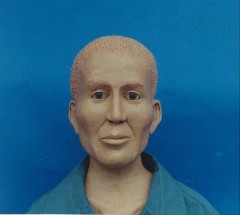 The unknown woman became known as Hancock County Jane Doe. For over two decades, investigators diligently pursued all leads regarding the woman's identity. In February 2009, an unidentified person’s case was entered in the National Missing and Unidentified Persons System (NamUs) as UP4862. A clay portrait was created to help approximate the woman's appearance. However, with all leads exhausted, the case eventually went cold.

Although early investigation into the case was hampered by a lack of basic information or viable clues, members of the Hancock County Sheriff’s Department remained open to new methods and opportunities to identify the deceased. In August of 2021, Hancock County Sheriff’s Department Investigator Ted Munden contacted Joanna Johnson - a forensic scientist with the Indiana State Police Laboratory - and inquired about advanced forensic tools such as forensic genetic genealogy, that might help generate new leads in the case. The two agencies teamed up and the Indiana State Police Laboratory performed an initial DNA extraction on the remains.

In March 2022, the DNA extract from the ISP Laboratory was sent to Othram's forensic laboratory. Othram scientists used Forensic-Grade Genome Sequencing® to build a comprehensive DNA profile for the woman. A few months later, Othram returned the DNA profile to investigators so that they could continue the investigation. The Hancock County Sheriff’s Department, working in conjunction with the Indiana State Police Laboratory used genetic genealogy to develop investigative leads pointing to the unknown woman’s identity.

The investigative leads were confirmed through additional DNA testing and at last, Hancock County Jone Doe's identity was determined to be Doreen M. Tiedman. Doreen was born on June 8, 1959. She would have been 34 years old at the time of her death. Doreen was from Cleveland, Ohio. It is thought that she was hitchhiking through the United States at the time that she disappeared. Doreen’s last contact with her family was in January 1994. Doreen was officially listed as missing in May of 1996 with the Cleveland Police Department and entered into NamUs in 2013 as MP20366.

The Hancock County Sheriff’s Department is now asking members of the public to share what they know regarding the life and death of Doreen M. Tiedman. Anyone with information about this case, including events or circumstances leading to the disappearance or death of Doreen M. Tiedman, is asked to call the Hancock County Sheriff’s Department at 317-477-1199.