Partial remains of a young girl, found in Oneida County, Idaho in 1986, are now known to belong to 15-year-old Patricia Campbell

In October 1986, a hunter in Two Mile Canyon, outside Malad, Idaho discovered a partial human skull. The hunter reported the finding to authorities, and led officers to the location of the discovery. As it turns out, five years prior, the partial remains of two girls were found in the area, both homicide victims, who had disappeared in 1978 from the Pocatello area. The two homicide victims were Tina Anderson and Patricia Campbell, ages 12 and 15 respectively, who's deaths remain unsolved. At the time of the discovery of the remains, Oneida County Sheriff's Office had not ruled out the possibility that the remains found in 1986 might be connected to the two homicide victims from five years earlier. 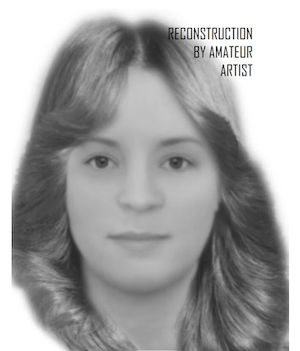 Investigators determined that the skull likely belong to an adolescent girl between the ages of 14-16. Her biogeographical origins were not clear, but an anthropological analysis suggests that she is most likely White, but possibly Hispanic. The uncertain ancestry stems from the incompleteness of the remains and the young age of the victim. The partial remains also made it hard to produce a definitive forensic facial reconstruction so the one posted here is amateur sketch which considered an image of the skull, but did not benefit from the availability of tissue depth markers.

With all leads exhausted, the Oneida County Sheriff's Office and Dr. Samantha Blatt from the Idaho State University Anthropology Department, in 2021, teamed up with Othram to see if advanced DNA testing could help provide new leads that might help identify this unknown young woman or at least identify a close family member. Dr. Blatt, having worked with Othram previously and having completed the skeletal analysis, recommended DNA and forensic genealogy to Oneida County to move the case forward and helped secure an initial donation for analysis. A DNASolves crowdfund was established to help cover the costs of DNA testing and genealogical research.

Othram express gratitude to everyone that supported the DNASolves crowdfund and enabled the identification of this young girl.