Murdered in 1984, Harriman State Park Jane Doe has finally been identified and her name will be released pending a homicide investigation. 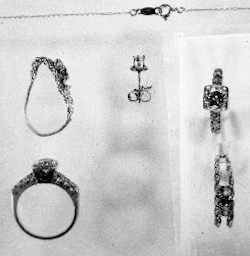 On Mother's Day 1984, the skeletal remains of a murdered woman were discovered by a hiker in a densely wooded, swampy area in the Orange County section of New York's Harriman State Park. The murder victim was a white woman presumed to be in her late 30's, with natural gray hair and traces of blonde or brunette dye. She was about 5' tall and there was evidence of extensive dental work. Investigators noted several distinct pieces of jewelry that the woman was wearing including a diamond stud pierced earring and a thin, delicate 14-karat yellow gold necklace. The woman was also wearing two rings on her right ring finger: a 14-karat white gold engagement right with a diamond center, and a 14-karat yellow gold mother's ring, which had aqua and ruby stones, and a third stone missing. 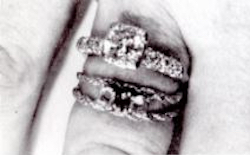 Through an autopsy, investigators determined that the cause of death was a gunshot wound and the death was therefore classified a homicide. There were few other clues at the crime scene and her description did not match the records of missing persons in the area. The case was entered into NamUs as UP9736, but with leads exhausted, the case eventually went cold.

In March 2021, as part of a collaboration between the New York State Police (NYSP) and the FBI, forensic evidence from the unknown woman was sent to Othram with the hope that advanced DNA testing might produce new leads to the woman's identity or to the identity of a close family member. Othram scientists used Forensic-Grade Genome Sequencing® to build a comprehensive DNA profile for the murdered woman. This profile was delivered back to law enforcement so that it could be used in a genealogical search. The FBI investigative team conducted research resulting from the DNA profile created by Othram and provided an investigative lead to to the New York State Police.

In September 2022, additional DNA testing with a possible family member confirmed the woman’s identity. Investigators have not yet released the name or photo of the murdered woman because a homicide investigation is currently in process. Investigators are, however, asking for anyone that might know something about this case to contact the New York State Police ( 1-845-782-8311) and to reference agency case number FMSP 84-269.